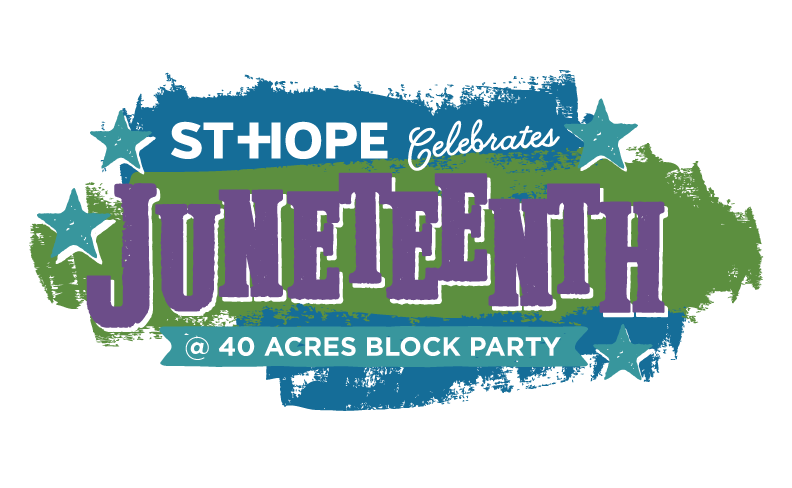 Saturday June 19th 2021, DJ Supe will be celebrating with The Juneteenth Block Party at 40 Acres. Location is in Oak Park on 3rd Ave. between 34th and 35th streets which will be blocked off for a safe and fun event. If you know where Esther’s Park is, you will be in the right place!

St. HOPE presents the first annual Juneteenth Block Party at 40 Acres on Saturday, June 19 from 10am-4pm. Join us for a day long event of activities for the entire family.

The 40 Acres Art and Cultural Center in Oak Park is the cultural cornerstone for the nationally celebrated Juneteenth holiday. Come watch short films in the historic Guild Theater, participate interactive activities down Art Ally, listen to live music and entertainment on the main stage, support local African-American vendors and enjoy a variety of cultural food!

The freedom of African Americans from slavery in the U.S. in 1865 is celebrated on the holiday Juneteenth on June 19. Juneteenth is made up of the words ‘June’ and ‘nineteenth,’ and it is on this day that Major General Gordon Granger arrived in Texas more than 155 years ago to inform slaves that slavery had been abolished.

Juneteenth, which marks the end of slavery in the U.S. and commemorates African-American freedom, is observed on June 19.

According to the official website of the historical event, Juneteenth is ‘the oldest nationally celebrated commemoration of the ending of slavery in the United States.’ Other than marking a pivotal date of significance in American history, Juneteenth also serves as an opportunity for African Americans to cherish their culture and heritage.

More than 155 years old, Juneteenth celebrates the liberation of African Americans from slavery in the U.S. The reason for it being celebrated on June 19 is because, on this day in 1865, when Major General Gordon Granger of the Union Army landed in Texas, he brought the news that the Civil War had ended and all slaves were free.

The proclamation declaring the abolishment of slavery was issued by President Abraham Lincoln on January 1, 1863, in the nation’s third year of an ongoing civil war. Known as the Emancipation Proclamation, it declared that ‘all persons held as slaves within any State or designated part of a State […] shall be then, thenceforward, and forever free.’ Granger’s arrival at Texas was to enforce this decree, which had originally gone into effect two years earlier.

The news had come as a shock to more than 250,000 slaves in Texas who were unaware of it.

On June 19, in the city of Galveston, Granger publicly read General Order No. 3, which stated: ‘The people of Texas are informed that, in accordance with a proclamation from the Executive of the United States, all slaves are free.’

As to why the news of the abolition of slavery reached Texas so late, there are varying accounts. One story states that the messenger bearing the news was assassinated on his journey. Some historians believe that the report on the Emancipation Proclamation was withheld by slave owners in Texas on purpose so that they can go about their business as usual and keep the labor force working. Historians also note that, until 1865, Texas remained a Confederate State, so Lincoln’s proclamation could not have been enforced until Robert E. Lee surrendered to the Union Army and they took over.

Either way, Granger’s arrival with the grand news stirred the air with jubilance and massive celebrations across the state. A former slave named Felix Haywood gave his recount of the first celebration in 1865 in the book “Lone Star Pasts: Memory and History in Texas” — ‘We was all walkin’ on golden clouds […] Everybody went wild […] We was free. Just like that, we was free.’

Even though they are officially made aware of the Emancipation Proclamation on this day, many slaves stay with their masters as paid hands. August 28, 1963 ‘I Have a Dream’

This act gives the federal government the power to enforce desegregation while prohibiting discrimination based on race, color, religion, or national origin.1980Texas Declares Juneteenth a State Holiday

While Texas was the first state to observe Juneteenth as a state holiday, many others have since followed suit. June 14, 2019. Call for a National Holiday