Troop Live in Concert at The Guild Theater

Troop Live in Concert at The Guild Theater 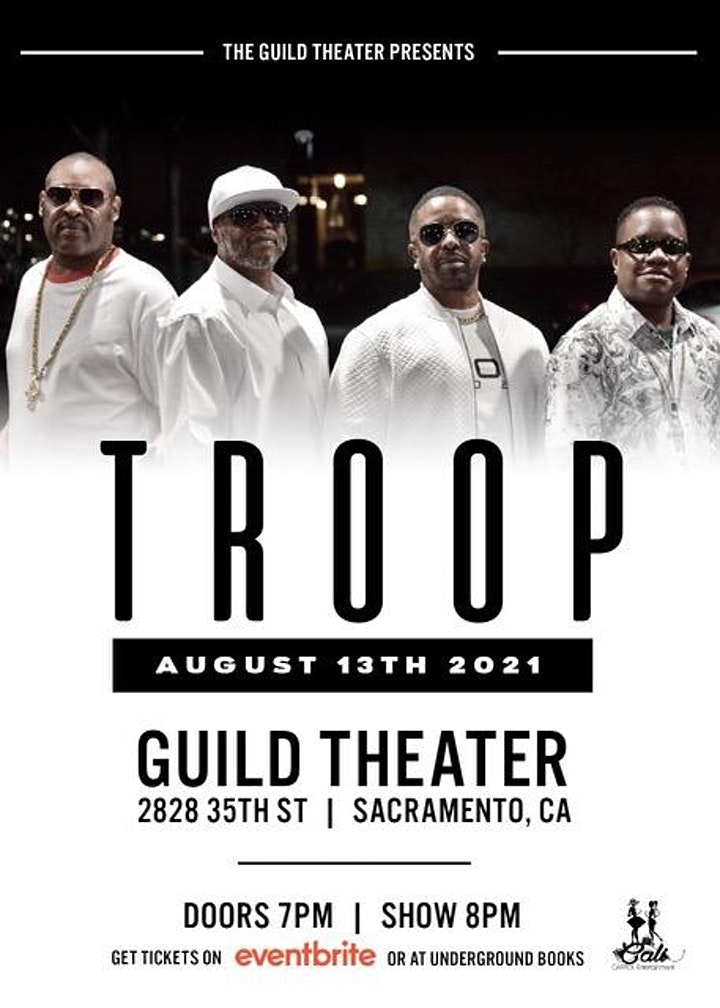 Spread your Wings and Fly Away with 90’s R&B group TROOP!

Come join us at The Guild Theater for a throw back to the 90’s with TROOP.
DJ Supe will be live in the mix

Get tickets at Eventbrite

Troop is an American R&B group from Pasadena, California, United States. The group has had three number-one singles and ten top-ten singles on the Billboard R&B Singles chart. They have also completed five albums, which include three certified gold and one certified platinum album. TROOP is an acronym for “Total Respect Of Other People”. The group is most notable for a series of number-one R&B hits, including popular cover versions of the songs “All I Do Is Think of You” and “Sweet November”, originally performed by musical acts The Jackson 5 and The Deele, respectively. They also had a number-one hit with the original song “Spread My Wings”.

Troop’s second album Attitude included the hit singles “Spread My Wings” and “All I Do Is Think of You” (a Jackson 5 cover), which were both number one on the Billboard R&B singles chart, and remained in the top 10 for several weeks. Attitude was certified platinum in 1990. Their third album Deepa was released in 1992, from which the single “Sweet November” made number one on the Billboard R&B singles chart. The group followed up Deepa with two more albums, A Lil’ Sumpin’ Sumpin’ (1994) and Mayday (1998), both of which were re-released in 2005.

About the Guild Theater

The historic Guild Theater is a premier entertainment destination in Sacramento. Located in the heart of Oak Park, the 200-seat theater is part of the larger 40 Acres Art and Cultural Center which features movies, plays, concerts, lectures and so much more!